How I write my unit tests in Go quickly

We all love unit tests because they help us to keep our software workable. And we all hate them because they don't appear magically - someone needs to write them. And when it comes to writing, it often takes a huge amount of time to cover the simplest cases.

But I found my way to do that without pain (okay, with less pain). And I will share it with you like a simple illustrated guide.

The principle isn't new, but it is still useful. Nowadays it comes with different names - hexagonal architecture, onion architecture, separation of concerns, etc. The main idea is that different parts (and I mean logically different parts) of your application should be separated into independent parts.

It's very important because you can't just test the whole app you're building. Ok, technically you can. But it will require an enormous amount of time and it will be a nightmare from a long-term perspective.

Instead, make it as independent as possible. But the app or at least the microservice cannot be independent of himself! It can, and we call it dependency injection. And it never was so easy as now in Go because we have...

That means that if some type has the methods described in the interface, we can use it via that interface. So there is no need to do a lot of paperwork at the beginning of the project and draw a huge UMLs with all possible interactions and relationships - just write an interface for your layer with its minimal requirements and pass the dependencies into it.

Example: you have a business-logic package that has to save some data into a database. No need to create or get a database connection somewhere in this package - just define a Repository or a Storage interface (or any more suitable name) and put there all actions you want to perform with the database - save, update, read, delete, increment a counter, etc. Then you just have to put the database object, that can perform that actions - it will contain the exact database query language code and database-specific logic. You also will handle the database connection and possible connection errors outside of the business-logic layer. The layer will become independent of the database layer.

There are many unmanaged resources like random number generators, time, random-based hashes an so on. They don't require outside injection because they have no outside dependencies. But they still can do unpredictable impacts on test results. So instead of trying to work around them in tests, just use the same approach - inject them as an isolated dependency. Bus since they are not provided from the outside, do that from the inside!

Here you can't predict the TimeToGo method response in the test - each time time.Now() will return a new value. But you can take charge of it:

Will work as before, but time.Now is now under your control! You can easily mock it in the test:

So try to avoid any dependency in your logical entity. Even such a small as a current time or a random value. It's ok to hide them under interfaces or function types.

100% coverage is a dream of any Open-Source developer. It's so nice to look at a green badge in your project's readme! But within productive projects, things work a different way.

Normally you just don't have enough time or resources to do a 100% test coverage. End even if you'll do so, during the active development phase you will change the logic so many times, so the number of test changes will be enormous.

But in fact, the 80/20 principle works here too: the 20% coverage of the "hottest" or most important code will cover 80% of the app's usage and dataflow. That means, start with the "hottest" code coverage. If you will have time and motivation you will write tests for less important parts and slowly will increase the coverage.

For example, if you're building a web search service, test the search engine first. If it really works as expected, you can cover autocomplete, translation, and live preview next. But without the reliable core feature you will fail.

Now you have a well isolated and pretty important part of your application ready. You need to fit your test into that frame. And thankfully your app consumes interfaces instead of exact implementations. That means, we can mock them in tests!

But writing mocks is a salt mine job. We don't have to rob a robot's job - let them do what they are designed for!

So I don't write test mocks, I generate them instead. To do that I use Mockery.

Say we have a database interface:

And a code that uses it:

We can generate the mock simply by calling the following command:

And it will generate a perfect fitting mock for your interface! It will be stored in the /mocks directory regarding the interface package directory (you can change it by specifying -output parameter). Then you only need to use it in your test:

I normally use either the go-generate to run the mock generation:

And then run go generate ./.... Or I just put them as a list in the Makefile with an absolute path. Or you can even generate mocks for all exported interfaces in your directory recursively. See the library details for more information.

The test case writing is hard and boring work. You have to prepare a lot of data samples, do a boring work of setting the environment up, preparing infrastructure like HTTP requests and response writers, mock servers, stub data, etc. And it's really tedious to write every got and want data check and corresponding errors.

But you can save some time by using shortcuts. And with shortcuts, I mean test libraries as testify to wrap repetitive parts of tests in clean and handy helpers!

Let's say you have a common HTTP response with something like this:

Simple, huh? But when you have to do that 100+ times it becomes a little bit boring... You don't have to wait 'till a boreout! Just use shortcuts:

It may be used in more interesting ways. Say, you have a method that returns a pointer and an error (a common pattern in Go). So you don't want to assert a returned value in case of error because it will cause a nil pointer to dereference. So you have to build a messy condition with a nil check and error check and so on... You don't have to:

You can make in even shorter by passing testing.T to the assert structure:

It may look simple, but trust me, it will give you enough saved time during unit testing to drink a cup of coffee. Even to brew a coffee!

I like tests, but when it comes to testing output, it getting harder to keep on track what's going on and which test was failed and why. It's ok when you have 10 or 20 test cases, but if you have hundreds of tests (or at least test sets, if you're using table tests for example) it's really hard to understand what's wrong just looking on the test output.

To make it more readable you have to give a proper description. But do you really want your test cases to be looking like this?

I hope you not. Otherwise please stop reading. Because this is my favorite part.

To achieve readability in test output and make it easy to navigate you can use BDD approach to testing. I use it for many reasons:

So let's take a closer look. For this kind of testing I use ginkgo library. It is paired with a gomega test matcher library, with a lot of test helpers and wrappers (more shortcuts!).

I'm not a fan of BDD itself, but I really like to use this approach in tests. So let me show you a couple of examples.

You need to set up a test suite. Normally I do that once in a package. 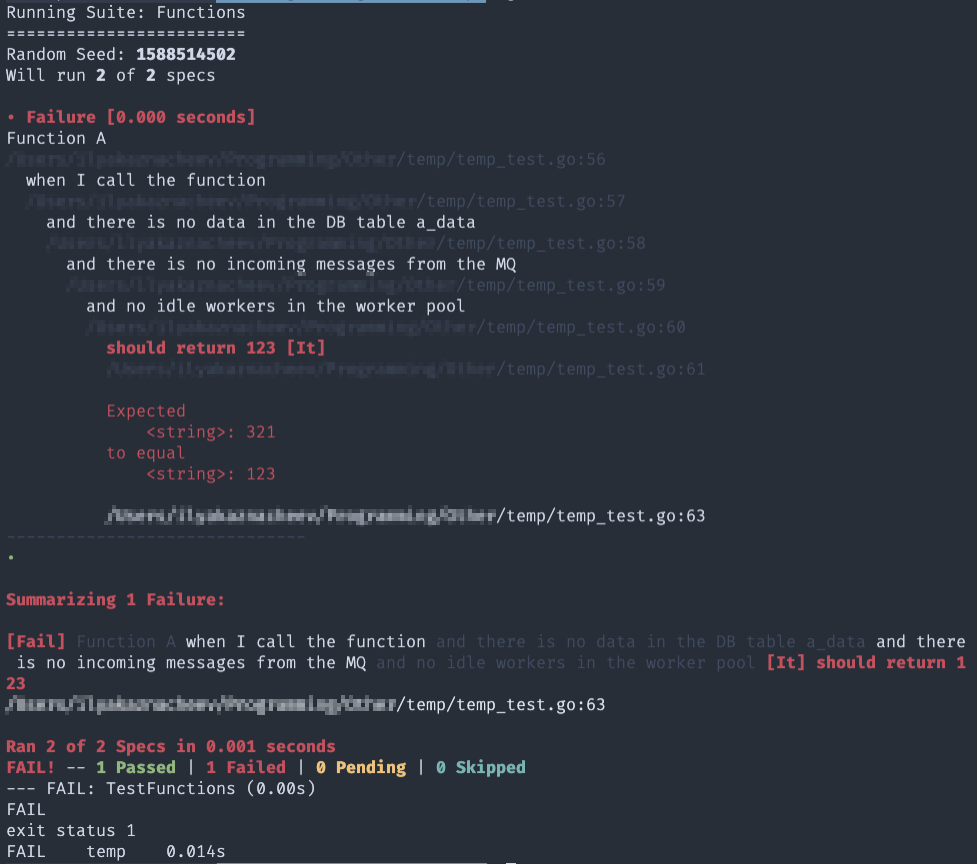 You can also add some data into any step, and it will be added each time your test will reach this node of the test tree.

So here is a whole story, and you can describe it using ginkgo! In this case, for example, the node And with data B will be executed 3 times:

You can use BeforeEach() to set up some context for each step (set some variables, functions, fill mocks, and so on). And also you can use AftrrEach() to cleanup at the end of the node.

The library has a lot of other useful functions - BeforeSuite and AfterSuite and many variations to help you organize your test better.

So the main idea here is to use it both as a meaningful description of the process under the test, and the test sequence and context of each step.

Putting it all together

So how to do it quickly? Let's summarize:

Pretty quick to write. And so easy read in CI logs!